Let's Talk Bioresonance: Part 1 - What is it?

Be warned this post will likely get a little technical & long. So if my fellow M.E Warriors are reading this, I recommend some breaks to take it in. Due to that fact, I've had to write this over a number of days...

A number of months ago now, I was put in touch with a couple of Bioresonance specialists (don't worry I will explain what it is in the course of this post) through a good friend, as one of the specialists had said they could definitely help me. In fact he said they could cure me! Now I think I've mentioned before that I don't like the word cure in relation to myself.  For such a small word, it can give you very big hopes that may not happen.  So I, instead, (I guess to protect myself from further grief & disappointment related to my M.E) think of it as, it can make me better or put me in the recovery stage of this illness. Actually as I've learned more about the main virus that causes M.E, (the Epstein Barr virus) that is more accurate I feel & here's why;

The Epstein Barr virus piggy backs onto other viruses, such as the flu virus or the one that causes Glandular fever, it likes to get itself deeply (the longer you have it, the deeper it is) rooted into all the body's systems & cells (this is why there are so many symptoms with M.E) So, even though the Bioresonance treatment can eliminate this virus over time, I am still at risk at picking it up again, actually I'm at a higher risk due to the fact I've got it now & therefore more susceptible to getting it again. This means once the virus is completely gone, I will still have to see my specialists a couple times a year to be checked.

Now I don't like comparing illnesses, but you could think of it this way; A person sadly gets cancer, they have treatment & the cancer is gone, (I know there's a lot for to it but I'm making it a simple comparison) some will say they are cured, others will class themselves as being in remission or recovery.  However, because the person has now had cancer, they are at a higher risk of getting it again & so have to undergo regular checks as a precaution.  This is how it will work with me, (I will be in recovery) & I'm ok with that as it's better to be safe than sorry.

I said above that I would explain what Bioresonance Treatment actually is, so here we go & I'll try my best to explain in simple terms (I'll explain it to you as I had it explained to me) as it can be quite difficult to get your head round at first.  I also ask that you keep an open mind to this as well:

Our bodies were created to "run" at certain healthy frequencies. Unfortunately, due to our current imperfect condition, our bodies frequency can be effected in a negative way by the things around us. Anything we have around us that emits it's own frequency (mobile/cell phones, T.Vs, computers & the like) can knock off our own healthy frequency.  The viruses, parasites & bacteria that we may come into contact with & contract also run on their own frequencies. Their frequencies, also have a negative effect on our own, this causes us to become ill.

The Bioresonance machine can identify these wrong, unhealthy frequencies, tell you what the found frequency actually is (wifi radiation, geopathic stress, viruses, to name a few) & eliminate these.  It also uses healthy frequencies to get the body to start it's natural healing process & then can help the body repair the damage that has been done by the viruses, parasites, radiation or whatever it is, that decided to live inside you. Once this is all done, your body is back to its normal healthy self. The time this can take varies depending on what illness, viruses, parasites, bacteria or radiation it's dealing with.

Just a point of note: There are a few of makes of the actually Bioresonance machines & they differ in the frequency wave form that they use.  One sends the frequencies through your body in the form of a curved wave, (think about how you draw rolling waves of the sea) this method is completely harmless & does no damage to the body cells & tissue at all. This is how the machine I'm on works & it's made by a company called Rayonex, I'm not in anyway endorsing them by the way, just passing on helpful information.  The other machines send the frequencies through the body in a block form wave & although this is still effective in treating you, I've been told that it apparently can damage the bodies tissue & cells, which is likely to cause more problems.  So if you do want to check out having this treatment, I suggest a couple of questions to be asked: What the wave form of the frequencies are? & what make the Bioresonance machines are?

This is the shortened, hopefully easier explanation of what Bioresonance is & does, but for more information, I suggest having a look at the following sites, as they might help explain it better:

This is the site for the makers of the machine I'm having my treatment on:

I think that about covers what or how the treatment works, well hopefully.  Now I'll tell you about the actual machine, as in what you do to be treated;

Firstly, here's what one type of the machines actually looks like: 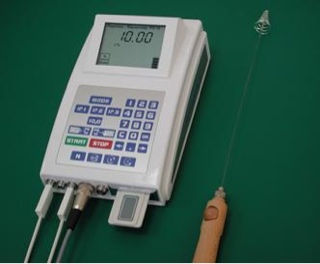 Now let's move to what goes where. So for starters, you get nice & comfy in your chair, (the one I'm in now is a recliner, which for me that's great as I am better with my legs up for a prolonged length of time) But originally I was in a normal comfy chair. I had to put my bare feet on two metal plates: 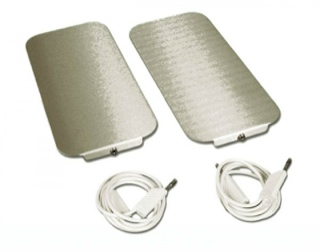 Then I had to hold in each hand, two metal probes (in want for a better word) like these: 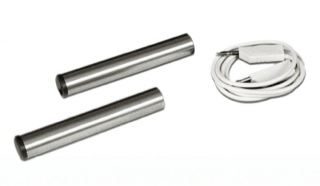 These are the contact points from which the waves produced by the Bioresonance machine enters the body.

I also had another probe, that I held but then was asked at times to place it on different parts of my body, mainly on my head, as that's where most of my Epstein Barr resided, the crafty thing! 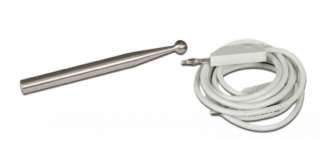 This probe is used when the waves need to be more intensive in certain areas of the body.  The exact location in the body is shown by the frequency given on the screen of the machine when the waves hit a problem.  It's also with this probe that you feel machine doing it's work, but I'll go into that more in part two of this subject.

There is also something called a Poloariser, or Aerial, that is attached to the machine as it works: 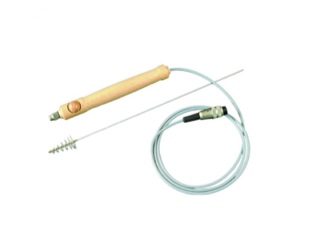 So you basically just sit in your comfy chair, feet on the plates, probes in hand & let the machine go about it's work. You can even nod off if you are so inclined, unless you are like me & want to know what's going on, what's being checked & what the problem is when the polariser is frantically giving up & down, which it does quite strongly with me at times - Thanks Epstein Barr!

One side note, which I think is actually pretty cool, (that might be the nerdy geek me talking) is that because of the way it works, you can actually add certain frequencies to water & then when you drink it, you are essentially putting those frequencies into your body. Yes I know that does seem a bit "out there" & hard to comprehend but come on in the medical age we live in, it's surely not that unbelievable? A couple of weeks ago, one of my specialists gave me two bottles of water that contained cellular energy (I'm not allowed energy in any other form as he doesn't want me running around before the damage in my body is completely repaired) in them to help my cells & Mitochondria gain some extra energy.

He also asked that I bring to my next appointment, a few 2litre bottles of water for him. This time, while I was having my treatment, he had the pack of water stood on two of the metal plates your feet to on & the treatment I was getting, the water was also getting. So I'm now drinking the water (it doesn't effect the taste) & having extra treatment until I go back in two weeks time!  Mind.Blown!

So there you have it I guess, that pretty much sums up Bioresonance Treatment in the least complicated way I could possibly master.  As you can see, I'm certainly no expert on this, but I feel like I've got a decent understanding of it & what it's doing to me in order to make me better. I really hope the information & explanation I've given has helped & if you want to know more, please feel free to ask me. Also don't forget to check out the links I've given, they will hopefully help.

In Part two, I will be sharing my own personal experience with this treatment, my diagnosis & how it actually feels while having it. My first experience of it was pretty interesting to say the least & I feel like sharing that will at least let anyone who is thinking of trying this, know what to expect, as I wasn't sure at all & as such, my adrenalin levels were through the roof leading up to my first treatment. But anyways, enough of that for now.

I hope you are all doing well, or are as well as can be. Please take care & I'll do my best to get Part 2 posted by the end of next week.

(I own none of the images used in this blog post) 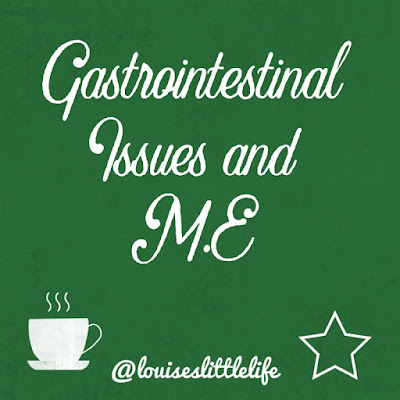 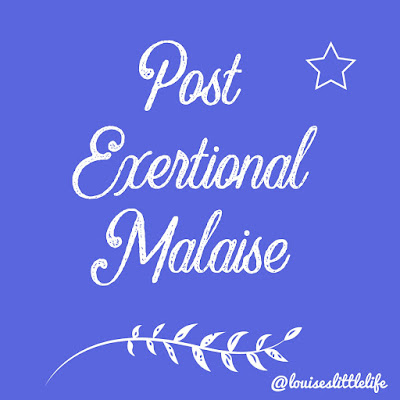 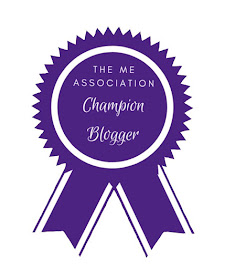 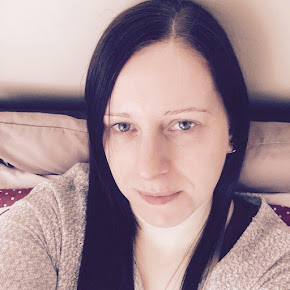